Our renovation of three of the Museum’s central halls demonstrates how historic spaces can retain their character while successfully supporting modern exhibits and dynamic visitor experiences. After almost a century of use, the galleries had accumulated layers of interventions that hid their high ceilings and architectural ornamentation and cut them off from other parts of the Museum. We restored a sense of openness and grandeur while upgrading the galleries for a new generation of visitors.

Our design embraced sustainable stewardship by renewing the historic fabric, reintroducing daylight into the space, reinforcing wayfinding, reducing energy costs, and connecting visitors to the natural world. Our work incorporated infrastructure improvements and modern technologies for the next century of service.

Designed by the architectural firm Hornblower & Marshall, the Smithsonian’s third building on the National Mall opened in 1910. Our work encompassed North Wing, which opens onto the grand Rotunda and originally housed the nation’s anthropological collections.

From Black Box to Beaux-Art Beauty

We first removed a 1970s mezzanine that intruded into the largest hall. We restored the galleries’ ornate Beaux-Arts moldings, which had been painted black, and a large laylight that had been boarded up and obscured by a low-hanging lighting grid.

Our work restored the original connections between the Rotunda and the central halls. With the relocation of escalators, visitors can see and experience the Museum’s grand spaces in the sequence the original architects intended.

We seamlessly incorporated new building systems into the architectural fabric, making them all but invisible. For example, air ducts, conduits, and sprinkler piping drop into each bay from the floor above, preventing horizontal elements from crossing the side galleries’ character-defining ceilings. 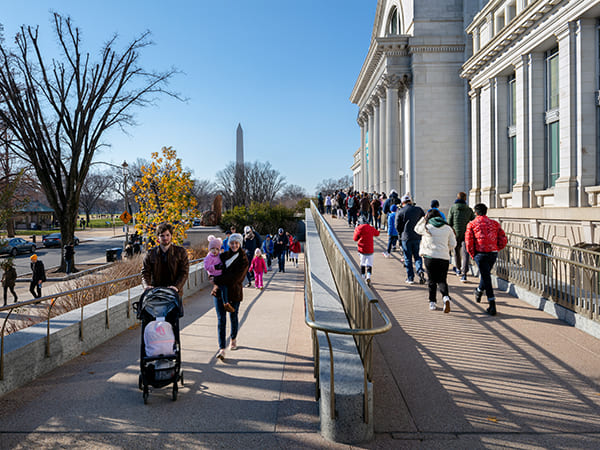 A Gracious and Welcome Approach 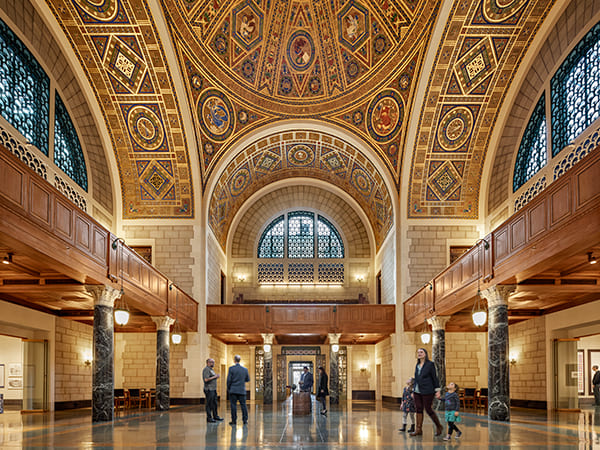